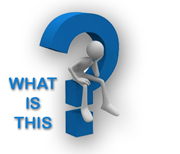 From time to time there are items in the Albury Collection that our curators cannot identify. If you can help, please Contact us

This small book is in the Albury LibraryMuseum collection and we know little about it. It appears to have been used as a book to record birth dates of family members and friends in the late 1800s, early 1900s. 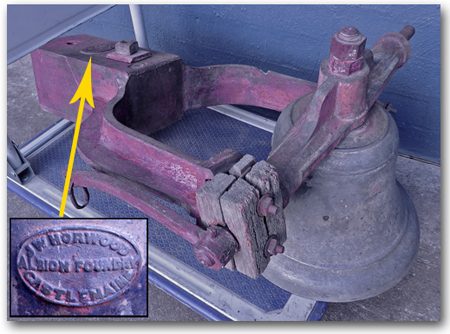 It was made by J W Horwood Albion Foundry in Castlemaine. They likely made bells from at least 1878 until 1894 when the business was sold.
As you can see from the photo, it has an arm to the left for a pulling rope to attach and it pivots in wooden blocks (one set missing). The mounting yoke is huge! The attachment block is around 15 x 15 cm in cross section. With a yoke like that it could have been mounted vertically, or horizontally with two mounting bolts.

We have the time frame that it was made and the serious nature of the mount, but where could it have been installed? 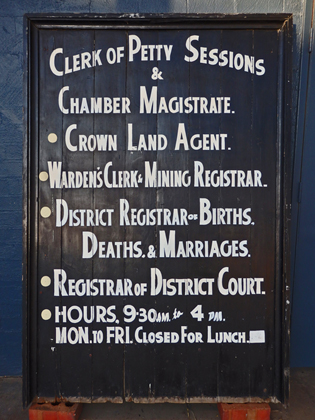 This sign found its way into the ‘Albury Collection’ and no evidence of the board could be found in photographs of Albury Court House.

We showed the photo again at September 2020 General Meeting and Geoff Romero recognised it – as a practising solicitor he saw it many times at the old Albury Court House until the new court house was opened in Olive Street in October 1987. Checking with other staff including Col Becker who was the Clerk of Petty Sessions at the time, Geoff confirmed his identification.

At  the following October meeting, Geoff told us a little more about the sign. It was fixed to the wall next to the office door on the eastern end of the court house façade. As the Clerk of Petty Sessions, the lowest level of justice in NSW, Col Becker would also be the Chamber Magistrate, giving advice and directions about court proceedings. Another role would be the Crown Land Agent, not as important now as in the early days of the colony; he was the Warden’s Clerk (receives money for mining rights and exploration licenses) and Mining Registrar, also more important decades ago, indicating how old the sign is. The office was also used for the Registrar of Birth, Deaths and Marriages and the Registrar of the District Court.