Published here is a short summary of A&DHS meetings over the past twelve months.
More detail of our past meetings can be found by going to Our Bulletin. 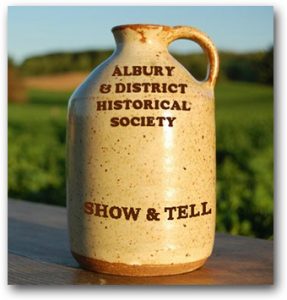 Our final meeting for 2022 focused around the theme of “Christmas in Albury in earlier times.” But before that got underway, David Christy and Natalie Wells from AlburyCity’s Planning Department explained the latest developments in relation to Heritage listed buildings in Albury and the process underway to review our Heritage listings.
We then moved on to our theme. Allan Wilson reminded us of many of the business names in Albury that have since disappeared. Richard Lee prepared a comparison of Christmases in 1956 and 1966. Jennie Romero showed us images of some of the special Mate’s Department Store Christmas windows that fascinated young and old from the 1950s to early 1970s, the technical expertise provided by Stan Heppner.
Following that we had the usual “Show & Tell,” again a fascinating look at some items from times past.
All was wound up with a supper provided for members by the Society. 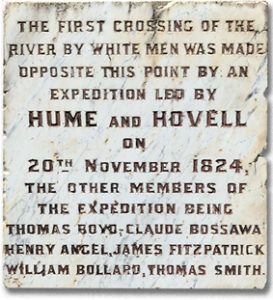 November 2024 will be the bicentenary of the Hume and Hovell Expedition. It is hoped the occasion is well celebrated for Albury’s beginnings started with the explorers’ arrival at our very “fine river.” The date was November 16, 1824.
Peter Harper, a Society member and a keen cyclist, explained his plan to provide an activity that combines his passion for cycling and the history of all the Victorian 1924 Hume and Hovell monuments. He hopes his ride that travels across Victoria from Albury will feature in many bicentenary celebrations.
Pictured is the plaque at the Hume Dam adjacent to the spot where the expedition crossed what they named the Hume River. 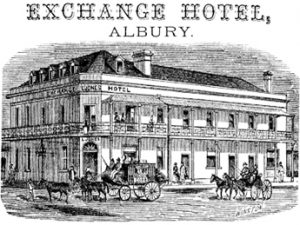 In a first for our Society, our guest speaker for our September meeting came from the other side of the world.
Cesar Becerra visited us again from Miami, Florida. He is an historian who was in Albury in 2019 researching William Brickell and Mary Bulmer who met in Albury during the 1850s. William Brickell made loads of money in Albury as a publican (Exchange Hotel, corner of Townsend and Smollett Streets), builder of the first Union Bridge (1861), Murray River punt operator, owner of a large general store and coach operator to and from Melbourne. When he returned to America he used Albury money to purchase over 6000 acres of land in Florida on which Miami is now built. 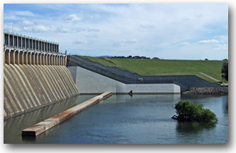 At our August meeting, Digby Jacobs, Director Riparian and Constraints Measures Programs with MDBA, gave us a very interesting and informative talk about aspects of water management including: Historical context of why water is managed in the Murray in the way it is today. What tools do we have to manage and what are the constraints to that management. A history of inflows and catchment behaviour – useful knowledge – what information/processes do we use additional to measurements? A picture of the high flows in 2021-2022. Where to from here – future management.

July 2022 Meeting
The Annual General Meeting of the Society, chaired by retiring president Greg Ryan, was held in The Elizabeth Room of the Commercial Club. Thirty one members and guests were in attendance and there were eleven apologies.
Our first item of business was a motion to adopt the Society’s new Mission Statement & Society Objectives, moved by Jenny Romero, seconded by Col McAulay. The motion was passed unanimously.
A motion was also passed to leave Society membership fees unchanged.
Minutes of the previous AGM were read and confirmed and the President’s Annual Report received together with the Treasurer’s end of year report.
Greg then declared all committee positions vacant before calling Society Patron Greg Aplin to the chair to conduct the election of our Society’s committee for 2022/23. Duly elected were:
President:  Geoff Romero;
Vice President:  Greg Ryan;
Secretary: Helen Livsey;
Treasurer: Simon Burgess;
Committee: Jenny Romero, Col McAulay, Yelly Evenhuis, Peter Harper and Steve Judd. 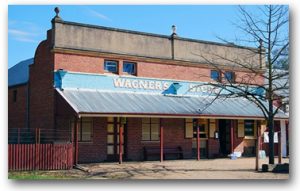 New president Geoff then took the chair and after thanking Greg Aplin, retiring president Greg Ryan and retiring committee members Ralph Simpfendorfer and Dennis Hickey, he closed the AGM and opened the July General Meeting.
We heard a very interesting talk from our guest speaker, Margi Wehner, speaking about the early history of the Jindera township before giving us some history of the Jindera Museum and the work of their historical society. We were then able to enjoy a light supper provided by our Society. 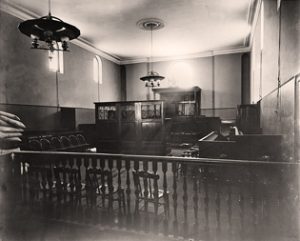 Geoff Romero was our main speaker and he gave us an entertaining talk focusing on the how over time the language of the law in the 19th and early 20th century was very formal and often quite difficult for the average person to decipher. Geoff handed out some original documents printed on vellum to illustrate his points.

We had notified that Digby Jacobs from Murray Darling Basin Authority would be speaking about aspects of water management, but due to a case of Covid, that presentation has been postponed until a later date.

A draft of our Society’s new statement of Objectives was discussed thoroughly. After members have the opportunity to see our final draft, the document will be presented to members for acceptance at July’s Annual General Meeting.

Border Bushwalking Club was founded in Albury–Wodonga in 1978 and has provided outdoor activities for thousands of people since then. At our May meeting, Eileen Clark outlined the early days of the Club and discussed how things have changed since 1978.

We had notified that Digby Jacobs from Murray Darling Basin Authority would be speaking about aspects of water management, but due to a case of Covid, that presentation has been postponed until a later date.

A draft of our Society’s new statement of Objectives was discussed thoroughly. After members have the opportunity to see our final draft, the document will be presented to members for acceptance at July’s Annual General Meeting.

After concerns about Covid caused the cancellation of our February and March meetings, members were pleased to meet again in April. Honor Auchinleck spoke about “a Very Ordinary Extraordinary Man,” her father Thomas Mitchell (left). We heard about his sporting achievements prior to WWII, the impact of his time as a POW at Changi prisoner of war camp during WWII and his political career after the war.

Colbey Baines told us how he was preparing to represent Albury’s CBD, “Then & Now” using the computer program “Minecraft.”

And we heard from Luke Stein of AlburyCity and Dirk Spennemann from Charles Sturt University speaking about the Albury Heritage Review being conducted over the next few months. 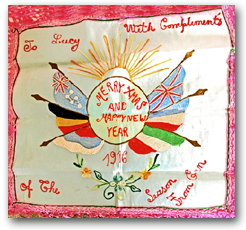 Jan Hunter related “A Story through Postcards” about a young Ernest Sharp who was killed in 1917 during WWI. He sent postcards to his sweetheart, Lucy Abigail Pape during the war.  Abbie later married at the age of 41 and had one child.  After her death her son found the postcards, and this is the story Jan told.  After Jan finished, Graeme, Abbie’s son addressed the meeting recalling how he found the postcards and other items.

Connor Fedorowytsch described how he goes about fossicking with his metal detector. Connor is a Science teacher at Murray High School which he attended as a student.  He is a keen detectorist and fossicker.  He started by going through the rules of fossicking, then showed and described some of the many and varied items that he has found.

That was followed by the usual December ‘Show & Tell’, always a popular and interesting part of our yearly program.

The image is of an embroided cloth sent from Cairo to Lucy Abigail Pape by Ernest Sharp in 1916. 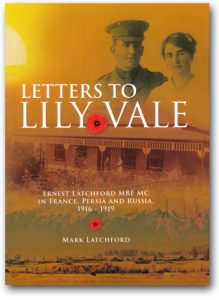 Colonel Ernest Latchford MBE MC, after whom Latchford Barracks is named, had a distinguished Army career spanning World War I and war in Russia following the Russian Revolution. Guest speaker at our November meeting was his grandson, Mark Latchford, speaking about his grandfather. Mark’s father, a graduate of Albury High School, rose to the rank of Major-General in the AIF. Mark has published a book Letters to Lilyvale describing his grandfather’s life with emphasis on his military career, much of which was revealed in letters back to his sweetheart in Lilyvale. This was also the first meeting of our Society that was delivered via the internet, with Mark presenting from home in Sydney via the Zoom app.